THE FASCINATING history of Reading’s most iconic monument, The Maiwand Lion, has been revealed in a new booklet published by Reading Libraries.

Local historians Mike Cooper, Katie Amos and Andrew Scott shine a spotlight on the intriguing story of the Maiwand Lion, which has stood proudly in the Forbury Gardens since 1886.

The authors look at the Battle of Maiwand, and the death of the men the statue commemorates, as well as revealing the hidden histories of the men listed on the plaque. They also explore other aspects of the lion including what it represents to the town, how it features in Reading’s art, football, songs and poems and not to mention April Fool’s jokes!

Cllr Karen Rowland, Reading’s Lead Councillor for Culture, Heritage and Recreation, said: “The Maiwand Lion stands proudly in our much-loved Forbury Gardens, but how many of us stop to wonder why and how it came to be there? I’m delighted that Reading Libraries have published this fascinating booklet – a must-read for anyone curious about the history behind our lion.  Thanks are due to the hard work of authors Mike, Katie and Andrew for compiling this tribute to Reading’s most iconic monument.

"The lion has come to mean so much more to the people of Reading beyond just its noble commemoration of those that died at the Battle of Maiwand, as the booklet details. The Maiwand Lion has most recently and poignantly, become the symbol of ‘Reading Together’ following the tragic Forbury attacks of June 2020.”

The booklet is available from Reading Central Library, and branch libraries, for £3 per copy, or for £2 the library can send you the full colour pdf version by email.  Pop in and speak to staff or email info@readinglibraries.org.uk for more details. 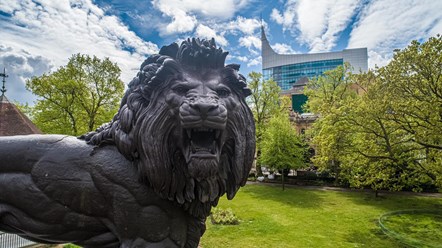