What are Reading’s food waste trucks named, aside from Ricky Gerwaste? Full list of names revealed

READING Borough Council can finally reveal the names chosen for its six food waste collection vehicles – two weeks after Reading boy Ricky Gervais broke the news of one of the names online.

Gervais, born in Reading, tweeted “Is there any greater honour than your hometown naming a garbage truck after you?” alongside a picture of one of the trucks with “Ricky Gerwaste” now emblazoned on it. Adrian Jack from Caversham, who submitted the entry Ricky Gerwaste, couldn’t believe the attention his suggestion had attracted. It included news article on the NME website and Ladbible and saw Ricky’s tweet receive 111,000 likes. Adrian, who visited the Council’s Bennet Road depot last week with his family to see the truck, said:

“I was looking for a pun on Ricky’s name because he is local. I saw the post tweeted before I’d been told I’d won, and it was really cool to see other celebrities liking the post. We recycle all our food waste so it was exciting to win”.

Aside from that one truck naming open to adult residents, Reading’s schoolchildren were given the honour of naming the other five food waste trucks, which have now had the names printed on them. Collecting over 2kg of food waste per participating household around the borough we now have:

Reading Borough Council’s Recycling & Enforcement Team visited Churchend Primary School on Monday to give Beau from the Reception class a certificate for his winning entry. The team hopes to visit all the winners at their schools in September to show them the personalised trucks. “We’re delighted that our trucks, which do such a sterling job each week of saving residents’ food waste from going to landfill, have now got names to give them some personality. I’m pleased Ricky Gervais is excited by the honour of having a truck named after him – we’ll happily show him his truck in person if he’d like to come home for a visit.

“It was great to meet Adrian Jack and his family who invented the catchy name. Ricky’s tweet certainly helped give our valuable food waste recycling programme the spike of attention that it deserves, as our residents are doing a sterling job in getting on board with the programme, but maybe he’s garnered a few more converts to our efforts with food recycling.  Thanks for the attention, Ricky!

“Importantly, the naming competition has helped raise awareness about the importance of food waste recycling amongst younger people who will hopefully get more involved with the scheme going forward.

“Keep an eye out for the trucks and see how long it takes to spot all six – never mind Pokemon Go, try Reading Food Waste Truck Bingo!” 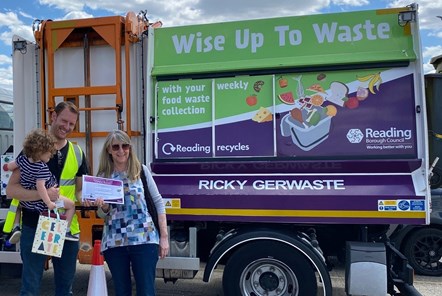 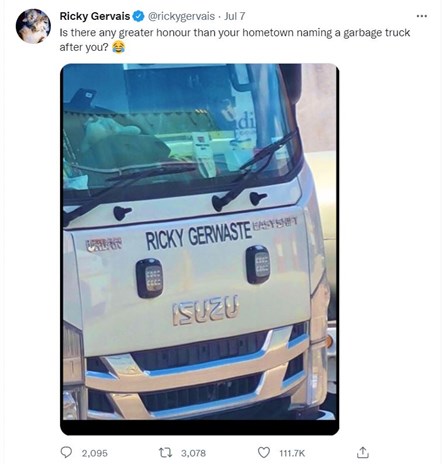 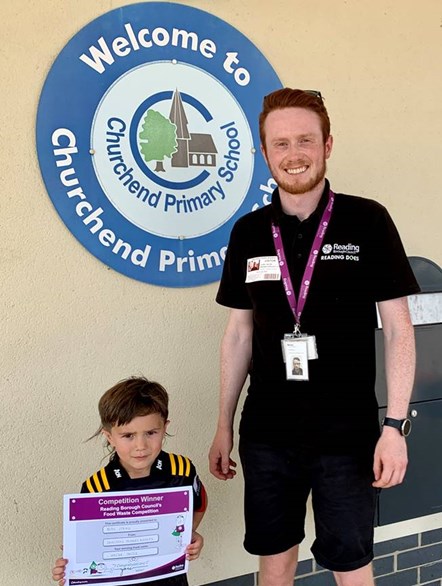