Local treasures on display to celebrate Her Majesty’s Platinum Jubilee

THE QUEEN’S connections with Royal Berkshire are highlighted in a new exhibition by the Berkshire Record Office, celebrating her reign and longstanding association with the county.

‘Happy and Glorious’ opens to the public from Thursday 26 May. Highlights from the exhibition display include: Above: The Queen's visit to Bisham Abbey for Golden Jubilee celebrations, 1977.

Mark Stevens, County Archivist, said: “The Queen’s Platinum Jubilee is a great and unique event.  Berkshire has been host to many royal occasions over the past 70 years and it is a pleasure to highlight some of these  - and, in doing so, to honour Her Majesty’s longstanding connection to our Royal County.”

Cllr Karen Rowland, Reading’s Lead Councillor for Culture, said: “As we all come together to celebrate the Queen’s lifetime of service as part of her Platinum Jubilee, I’m delighted by the wide range of wonderful events and activities we are hosting in Reading. I’m really pleased Berkshire Record Office has added to the Jubilee offer with their fabulous new royal-themed exhibition ‘Happy and Glorious’ and I encourage everyone to come along to check out their fascinating displays – or visit the BRO website to find out more.”

This free exhibition is on from Thursday 26 May to Friday 26 August, Tuesday-Thursday, 9am-5pm; Friday 9am-4.30pm.  Find out more at https://whatsonreading.com/venues/berkshire-record-office/whats-on/happy-and-glorious  or visit the BRO website at Web: www.berkshirerecordoffice.org.uk

For the many other Jubilee events and activities on offer visit: www.reading.gov.uk/news/reading-hosts-four-day-jubilee-extravaganza-in-june

The Queen’s connection with Berkshire started before her ascension to the throne. On 5 July 1947, a young Princess Elizabeth was awarded the Freedom of the Borough of Windsor at a ceremony held in the Home Park. As part of the event, she made a declaration to be ‘subject and obedient to all the good order and customs of this borough’ and signed the Freeman’s book. This is the earliest event demonstrating Her Majesty’s long association with the county that the exhibition covers.

The Queen’s 1953 coronation was celebrated throughout the county. The Reading Standard reported on local activities including ‘processions and parades, carnivals and displays, sports and games and hundreds of teas’. Decorations could be seen along Reading’s high street including at Jacksons corner, a photograph of which will be on display.

In Newbury, celebrations centred on the Coronation Carnival, an event which was reported to be the biggest show ever staged locally. It included nearly 60 decorated vehicles and many fancy-dress characters. Tickets were issued, entitling holders to a seat on the route of the procession. Souvenirs, such as tickets, a programme and even a napkin from the event, will all be available to view.

Another focus of the exhibition is looking at the way Her Majesty’s previous jubilees have been marked over the years. Events, like the ones held for the coronation, were held again 25 years later to celebrate the Queen’s Silver Jubilee in 1977. Examples from the exhibition include photographs of the celebrations in Bisham, that included a parade with fancy dress, sporting activities at the Town Farm and tree planting.

Along with events organised by local communities, there was also more formal celebrations held to mark Jubilees. On Friday 10 May 2002 the Berkshire Golden Youth Event was held at Bisham Abbey National Sports Centre to mark the Queen’s Golden Jubilee. Over 1000 children were invited to the event, which the Queen and Prince Philip attended, where they demonstrated their skills and achievements in sport, arts, culture, leisure, and community service.

Formal monuments have also been constructed. To commemorate the Diamond Jubilee, the Windsor and Eton Society held a competition for people to design a monument to mark the occasion. The competition was won by teenager Caroline Basra with her design of a spiral of 60 spheres. Her Majesty unveiled this monument, which was installed in the King Edward Court, on 9 October 2012.

Another way jubilees have been celebrated is through the planting of trees. This year ‘The Queen’s Green Canopy’ is inviting people across the United Kingdom to ‘Plant a Tree for the Jubilee’. They also plan to identify 70 Ancient Trees to celebrate the 70-year reign of Her Majesty. See some examples of tree planting and learn more about Berkshire’s oldest trees in the exhibition.

Throughout her long reign, the Queen has attended many official events in Berkshire. Prints on display demonstrate the variety of events she has attended. This includes presenting new regimental ‘Colours’ to troops at Sandhurst in 1974; the opening of Shire Hall, Shinfield Park, 1982, to the more recent opening of the Britwell Centre, Slough, in 2013, and a visit to Bracknell to view the redevelopments in 2018.

Berkshire Record Office is the local archives service for the Royal County of Berkshire.  It is based at 9 Coley Avenue, Reading, RG1 6AF.  It holds archives from public authorities and private organisations from across the county and these date from the 12th century to the present day.  Other notable collections include the archives of Broadmoor Hospital and Reading Prison. 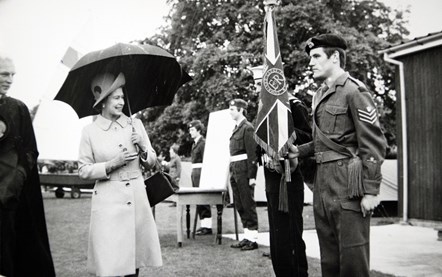