READING’S much-loved grade II listed monument of George Palmer, that presides majestically over Palmer Park, is gleaming again after a thorough deep clean this month, in anticipation of the opening of the new community pool.

Time had taken its toll on the bronze statue, which has resided in the park since 1930 and the monument was looking somewhat drab and weather worn. The statue immortalises the famous philanthropist known for his partnership with Thomas Huntley, which famously formed the biscuit factory Huntley & Palmers.

To get the statue looking its best for the opening of the new leisure facilities, the Council enlisted experts, Imhammad, Wojciech and Daouda from M A Polishing, who started work on Monday 5 September, taking a day and a half to carefully clean off the layers of dirt that had built up on the statue and carry out restoration work to improve its appearance. The statue will form an integral part of the large new pedestrianised area surrounding the sports centre, where in addition to the refurbishment of the existing stadium building, there will be:

Recent drone footage of the site shows the replacement of the old roof is complete and the solar panels and Air Source Heat Pump are now in situ on the new roof. As part of the Council’s commitment to tackling the climate emergency, the sustainable measures we’ve invested in will equate to a 50% reduction in the carbon emission rate of the new pool’s heating system.

Cllr Adele Barnett-Ward, Lead Councillor for Leisure and Culture, said: “I’m delighted to see such an iconic Reading landmark gleaming again. Thanks to our expert statue cleaners for restoring this statue to its former glory, which is particularly important for us in the run-up to the completion of the new facilities. It is also timely as the world-renowned biscuit makers, Huntley & Palmers, marks its 200-year anniversary.

“With the George Palmer statue now looking its best and seeing the gathering momentum of the progress at the Palmer Park site, really heralds the new era for leisure in Reading.

“Very soon, Reading will boast a brand new 25m 6-lane community pool at Palmer Park, linked to existing sports facilities – combining the benefits of a sizable pool, velodrome and athletics stadium all in one accessible location – delivering a fairly unique facility in the region and putting Reading firmly on the map as a top sports destination.” 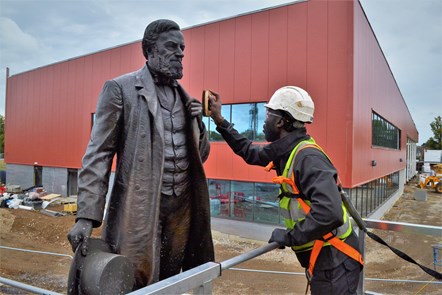 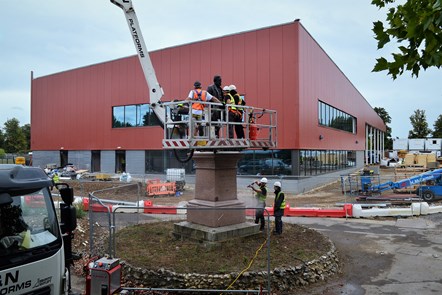